Our  goal is create an ongoing conversations with our own accounts or others in #netnarr. An intent of this make is to explore the influence we can have in social media by both human and automated means, plus what can happen when we are communicating online, but perhaps not sure if we are responding to a person or a software agent. And also, we want to experiment with how to generate messages that make our character accounts seem real.

You can see a few bots created by previous #netnarr participants at https://twitter.com/netnarr/lists/they-might-be-bots

We will use Zach Whalen’s Google Spreadsheet Twitter bot method — you only need a google account to set one up.

Now let’s pause. That’s the setup. What  you want to think about now is a sentence structure for the tweets that our sheet will send that has a pattern to allow use of multiple words randomly chosen for parts of the tweet. We also want to make sure one of those random things is the twitter names of people in our class, so we mention people or invite them to respond. And also, to make it relevant to the project/assignment you are working on,

Let’s say my mission is to advocate for the human attribute of bots. My sentence structure might be something like:

[opening conjecture calling out] [twitter name] [Opening part of question][object of question, people] to [do some kind of action?] #netnarr

Try to come up with a pattern that sounds conversational. Look at the structure of one made for @rebegmaestro

The idea is that the tweets would work with any combinations of words from the columns. Note that if you out a single row in (like the #netnarr) hash tag it will be used in every message. Create enough options to make your bot not sound so… robotic. And also, one column should include your classmates, try to draw them into the conversations. You can find them in one of the Twitter Lists or just by perusing the #netnarr hashtag in twitter.

We can run some tests before we send our bot tweeting. Go to the Preview tab. Select Generate Preview from the Bot menu to see how your tweets will look. Check to make sure there are no odd syntaxes or awkward grammar. 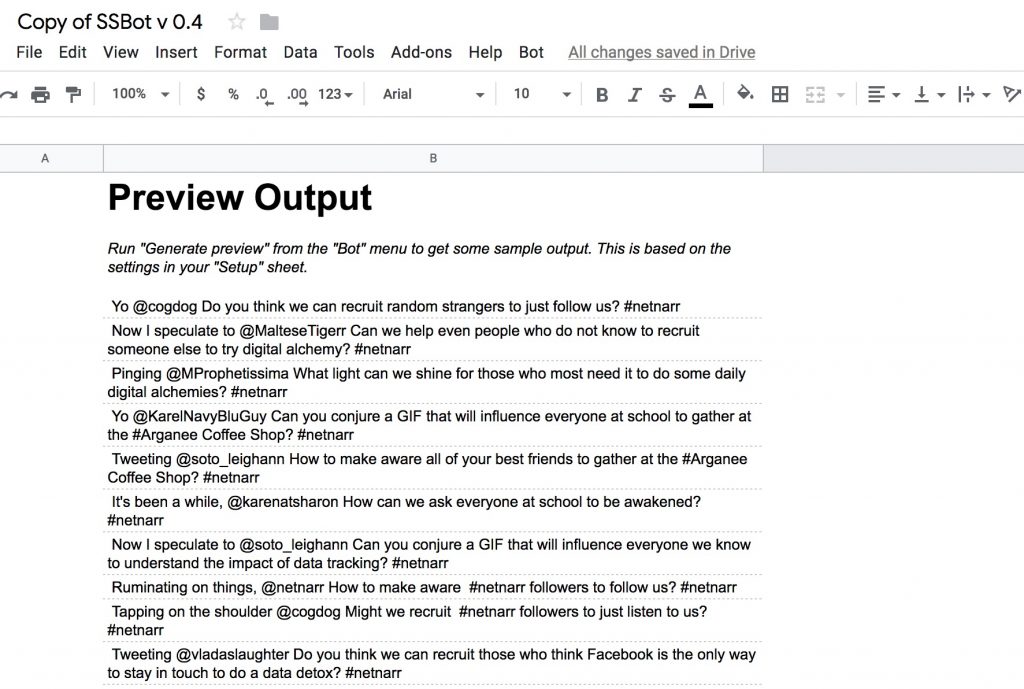 If it looks okay, select Send a Test Tweet from the Bot menu. Check your own tweet to ensure your bot is posting.

Return to the Setup tab of the spreadsheet and under Step 8 select an interval for your tweets to be sent– we suggest 4, 6 or 8 hours so you are not annoying.

Finally set it in motion, by select Start posting tweets from the Bot menu. Note that you can update, edit the columns at any time.

Now your bot is tweeting.

If your bot is sounding repetitive, try adding more word choices to your columns, or reducing the frequency of tweeting to every 8 or 12 hours.

Use as an example response to this make one link to your bots tweets,

Tapping on the shoulder @fab_euphie What light can we shine for disbelievers to make light in the digital darkness? #netnarr

1 Response for this Make